Thermal radiation is part of the broader phenomenon of the propagation of electromagnetic radiation emitted by bodies and is transmitted from a warmer body to a colder body at the speed of light without heating the air.

The electromagnetic radiation, which corresponds to the transmission of heat, is called thermal radiation: it is emitted due to the vibratory and rotational motions of the molecules and atoms of a substance and is extended in a range of wavelengths from 10-2? m (in Ultra Violet: UV) to 102? m (Infrared).

The property of electromagnetic radiation is that it propagates in all directions, it is not absorbed by the air, but only by solid bodies which immediately transform it into thermal energy. If we consider a hot body placed in an environment whose walls are at a uniform temperature and lower than that of the body after some time, it will be possible to see that the body has cooled down and has reached thermal equilibrium with the walls .

A body at a certain temperature T emits and receives electromagnetic radiation with a certain intensity that can be variable over time, regardless of the medium in which it is located, therefore also in a vacuum.

Irradiation is characterized, compared to the other two heat transmission mechanisms, precisely by being able to take place even in the absence of matter between the systems affected by the heat exchange. Often in practical applications the three transmission mechanisms of thermal energy take place simultaneously with different intensity. In a vacuum, on the other hand, the transmission of heat can only take place by radiation. A total absorber or black body can therefore be defined as a body that has an absorption coefficient a = 1 relative to each wavelength.

An object of this kind absorbs the radiation of any body without reflecting it, despite being a large emitter and at high temperatures it can be colored by emission. A gray body, on the other hand, is a body that has the coefficient a <1, but constant at all wavelengths. Finally, the white body has a = 0 for all frequencies and therefore zero absorption.

As is known, the human being produces heat on its own and partially disperses it in the environment by conduction, convection, radiation and evaporation through sweating. When the body ends up losing too much heat, there is a sensation of cold; on the other hand, when it disperses too little of it, there is a sensation of heat. The difficulty of those who deal with heating lies in keeping humans within a specific climatic zone indicated by a graph known as the Bedford-Bachman Optimal Living Comfort Curve. By following this need, analyzing the optimal Comfort curve, it is highlighted that it is linked to an interaction between the air temperature and the average radiant temperature of the walls. For example, Thermal Comfort can be achieved by having: 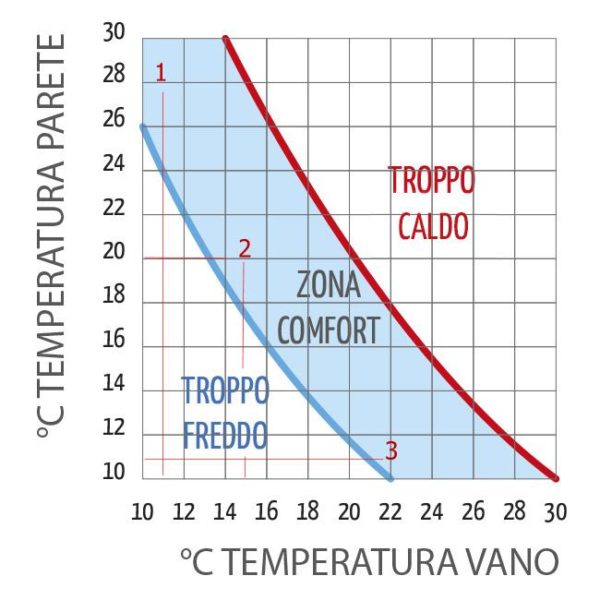 As can be seen from the diagram, all three possibilities place the man in the area of ​​maximum comfort. The perception of Comfort and Wellbeing in an environment is in fact linked not only to the air temperature (ta), but also to the temperatures of the surfaces surrounding the body (average radiant temperature - tmr), or to the so-called Operating Temperature, which derives by the combined effect of both temperatures. This type of heat propagation which consists in the transmission of infrared radiation is called RADIATION.

Traditional heating systems that work mainly by convection, not being able to effectively raise the temperature of the walls, create the comfort zone by raising the air temperature.

This system has the disadvantage of not being energy efficient, as the air does not have the ability to store large amounts of energy and therefore needs to be continuously heated. Heating the air also increases the circulation of dust, the dryness of the air itself and an important thermal gradient is established between the different areas.

The most energy efficient and also the most effective system for keeping the human being in the comfort zone is to raise the temperature of the walls. They accumulate heat and transfer it to the human body that perceives it. The best demonstration of this can be deduced from the fact that, on a beautiful winter day, passing from a shady area to one in full sun, we experience an immediate sensation of warmth.

Traditional heating systems with natural convection (radiators) or forced convection (fan coils) use air as a vector for transporting the energy necessary to heat the environment, thus favoring the phenomenon of thermal stratification with a thermal gradient of about 1.8 ° C for each meter of room height.

This means that, in a room three meters high, there will be a temperature difference between the floor and the ceiling of about 5.5 ° C. With CARISMA ORIGINAL® radiant plates this phenomenon is considerably reduced up to about 0.5 ° C per meter, with the result that in the same environment there would be only 1.5 ° C degrees of difference between the temperature of the floor and that of the ceiling.

In homes with irradiation systems, the consistent reduction of the thermal gradient favors a substantial decrease in the thermal load necessary for heating the rooms as well as the well-being and comfort that is obtained in an environment where the temperature is more uniform. 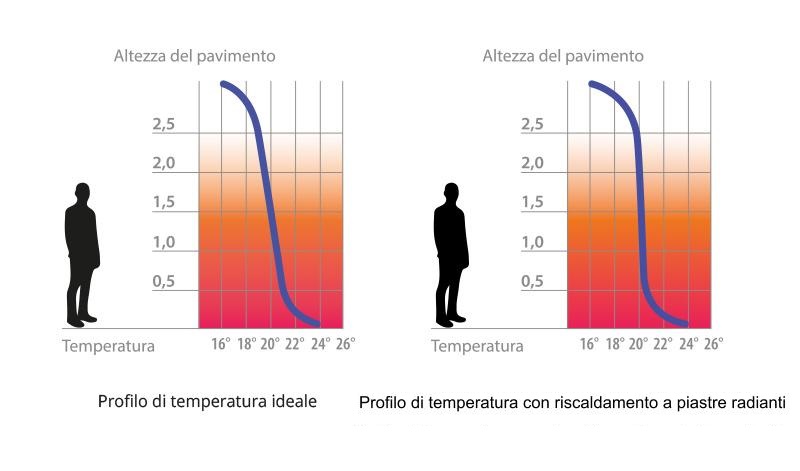 Because their particularities can be summarized as follows:

The air conditioning with CARISMA ORIGINAL® radiant plates, radiant technology heating elements, allows to comply with the provisions concerning Energy Saving, Reduction of Emissions into the atmosphere and to guarantee better Thermal and Environmental Comfort.

Technical characteristics of the heating body

Construction features of the heating body

The radiators are equipped with: